PoolBall is an unprecedented combination of pool and football. It is the perfect mix of feel, tacticts and fun. You play football on an oversized pool table. The focus is on fun and entertainment.

Poolball® - how you play it

As already mentioned, PoolBall® is a combination of football and billiards. It is played with two teams of 1 to 10 players per team. On an oversized pool table, the teams have to kick the balls in the corresponding goals alternately with the combination power but also with some aiming accuracy. The special balls in billiard design were made especially for PoolBall®. Footballian skills are not necessarily in the foreground.

Target group for your Poolball®

PoolBall®, brings a lot of fun and is also very popular with women and children. So it is ideal for a somewhat different company celebration, as a customer magnet, for family celebrations, children’s birthdays or as an event tournament in large locations. It is important to sink the ball into the goals of the table. How? Whether with the head or with the feet, everything is permitted. Whether tactically highly concentrated or with swinging pirouettes, the main thing is that the ball is inside. You play a modified version of the 8-ball known from billiards, but with one serious difference: You are the cue!

You are only allowed to play with the original PoolBall® balls and within the border.

Except for the players and a referee (match observer), nobody is allowed to enter the field of play in order not to endanger the course of play.

Goal of the game

Two players or teams compete against each other. You play with the white ball on the coloured ones, in order to get them in the goals.
One player plays on the „halves“ (balls 9-15), the other on the „Vollen“ (1-7). When all balls of a team have been sunk, the
then play it on the black ball (ball 8). If the player correctly (the goal must be announced before each shot),
but can change after each failure), he has won.

The colored PoolBall® balls are built into a triangle and should touch each other. The black ball (No.8) is located on the foot point in the middle of the triangle. At the two back corners there is a full ball and a half ball. The remaining balls can be distributed freely in the triangle.

If no ball is pocketed during the opening shot, the opponent continues to play from the current position.

If a foul is committed at the opening shot, or as long as the assignment of the colours is not clear, the opponent starts his shot from the head point and may not play a ball directly in the head field (i.e. in the quarter of the table between the head point and the headband).

The opponent always comes into play when:

A foul is present if:

Loss of the game

The game is lost when:

All Important at a glance

In order to get the perfect billiard feeling, the table corresponds to the exact proportions of the World Pool Association – of course adapted to the size of the PoolBall footballs.

The PoolBall table has a footprint of 8×4.5m. The table is about 47cm high. The playing field itself is about 35cm high. This creates a unique playing feeling on a kind of stage where the balls are sunk into the holes like balls in billiards.

To provide a safe experience for your guests, the PoolBall table has 6 sturdy metal baskets that prevent players from accidentally falling into the holes. The treads are coated with a non-slip and hard-wearing special lacquer and thus offer the greatest possible safety.

In our price of the PoolBall the construction in your location is already included. You simply provide our assembler with a powerful helper for the set-up day and we assemble the table on site in just one working day.

All play balls are specially made for the PoolBall, are bounce-reduced and have a weight specially selected for the table and the game. This ensures that the balls remain on the table during the game and do not bounce. These special balls are not available in stores and are already included in our price!

The surrounding advertising boards offer approx. 12m² of individually designable advertising space. A logo placed on the artificial turf of the pitch is also possible. A branding of the table can be done by yourself. On request we can do this for you and provide you with a cost estimate according to your branding wishes.

With a total weight of approx. 1.5t, the PoolBall table is so solid, stable and of such high quality that even groups of people on the table can celebrate and cheer their victory without any problems. The stable substructure made of KVH wood alone weighs 800kg. The 36m² playing surface is made of 18mm thick screen printing plates.

Not ours, but yours, those of your customers or sponsors. Who stands on the table, shows himself and who shows himself stands in the centre. On a total of 24 running metres of perimeter advertising, we offer you an area of approx. 12 square metres, which can be individually designed for you or your customers. Of course there is also the possibility to brand the high-quality artificial turf with a logo or to transform the table with an optional light package into a PoolBall®-Arena with stadium floodlights.

The whole thing becomes even more exclusive if you decide to brand the artificial turf – in the style of the big indoor football tournaments! 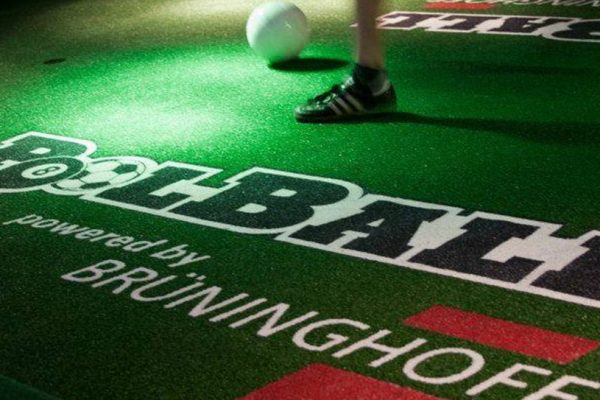 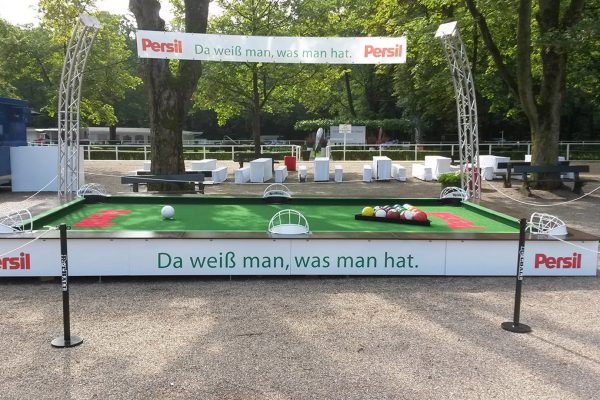 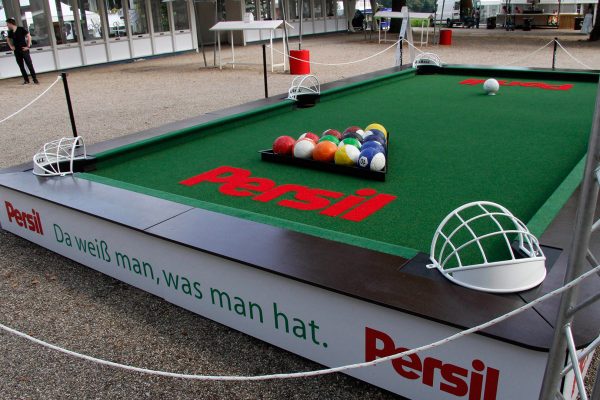 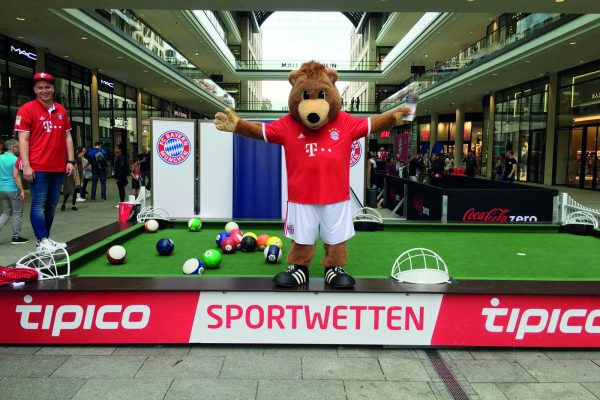 PoolBall is global. Within Germany – from Hamburg to Munich – or even internationally – from the USA to China – everywhere people like to play PoolBall. The simple playing principle makes PoolBall popular with practically every target group, at daytime events or leisure locations.

If you would like to use a PoolBall table in your location as an additional entertainment module, then we can make you the following offers:

Refinancing of an investment in a Poolball®

Experiences of already existing leisure facilities, which rent the PoolBall table in their location hourly, document that rent prices per hour, depending upon weekday and time, of 30 to 40 euro can be interspersed.

For general inquiries please use this contact form. If you already know whether you are interested in renting or buying the module, please use the respective inquiries.

Most questions can be answered in a short conversation. We would therefore be happy to advise you by telephone: